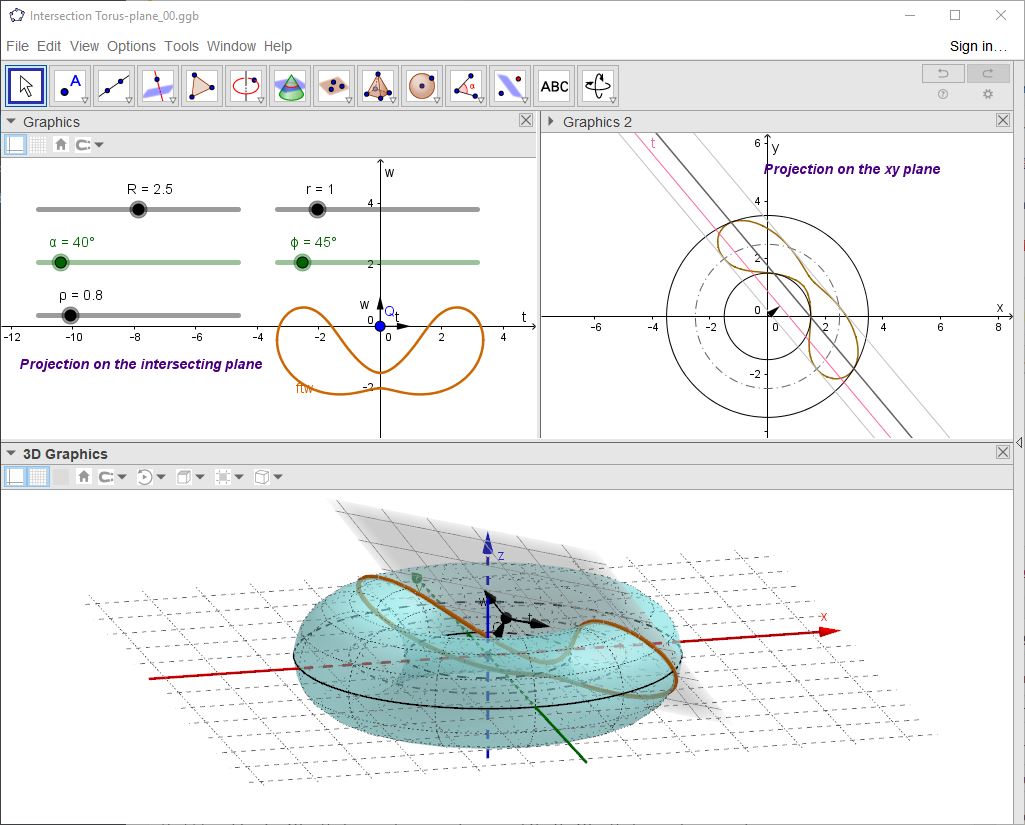 The curve of intersection of a torus with a plane is called toric section. Even if both surfaces are rather simple to define and are described by rather simple equations, the toric section has a rather complicated equation and can assume rather interesting shapes.

In this article I’ll discuss some properties of this curve, investigate its differences with the most renowned conic section, show how to build its general quartic equation, explore how a toric section can also be generated by intersecting a cylinder with a cone and finally describe how it is possible to represent it in the 3D Graphics view of Geogebra.

In the article only elementary algebra is used, and the requirements to follow it are
some notion of goniometry and of tridimensional analytic geometry.

The torus and the toric sections

The torus surface is generated by rotating a circle with radius r around an axis coplanar with the same circle, following a second circle of radius R. The two radii r and R are so the parameters that identify the torus’ shape. In the following lines (if not otherwise specified) we’ll always assume that

(to avoid self-intersections), and that, in Cartesian coordinates, the equatorial plane is the xy plane and the axis of rotation is the z axis. 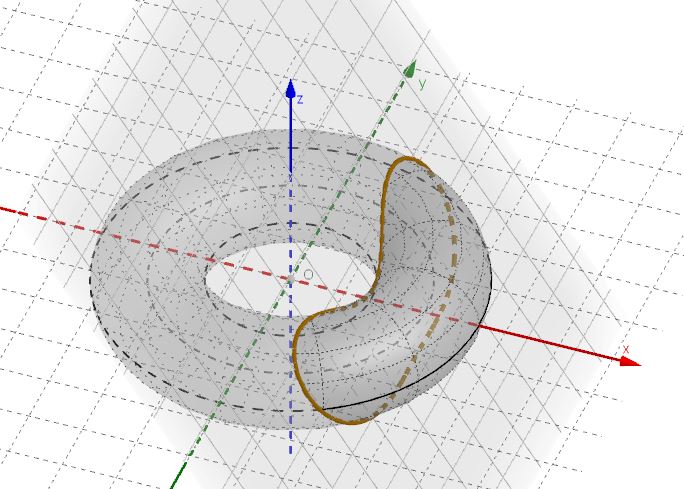 fig. 02b – The renowned conic sections

But whilst conic sections have a (deserved) renown also due to their multiple connections with many fundamental problems of (classical) physics, toric sections are often relegated to the realm of mathematical curiosities and exotic curves. Yet…

The variety of the toric sections is quite rich and the study of the case when sectioning planes are parallel to the symmetry axis of the torus dates back to antiquity. The corresponding curves are usually called “the spiric sections of Perseus” after their discoverer (circa 150 BC). Among them, one can distinguish Cassini’s curves (in particular, Bernoulli’s lemniscate).

The variety of toric sections

In this section we’ll shortly describe and present some particular toric sections that also have an historical relevance. Amongst them Villarceau’s circles, Cassini’s ovals, Bernoulli’s lemniscates and the Hippopedes of Proclus.

The central toric sections and the Villarceau’s circles 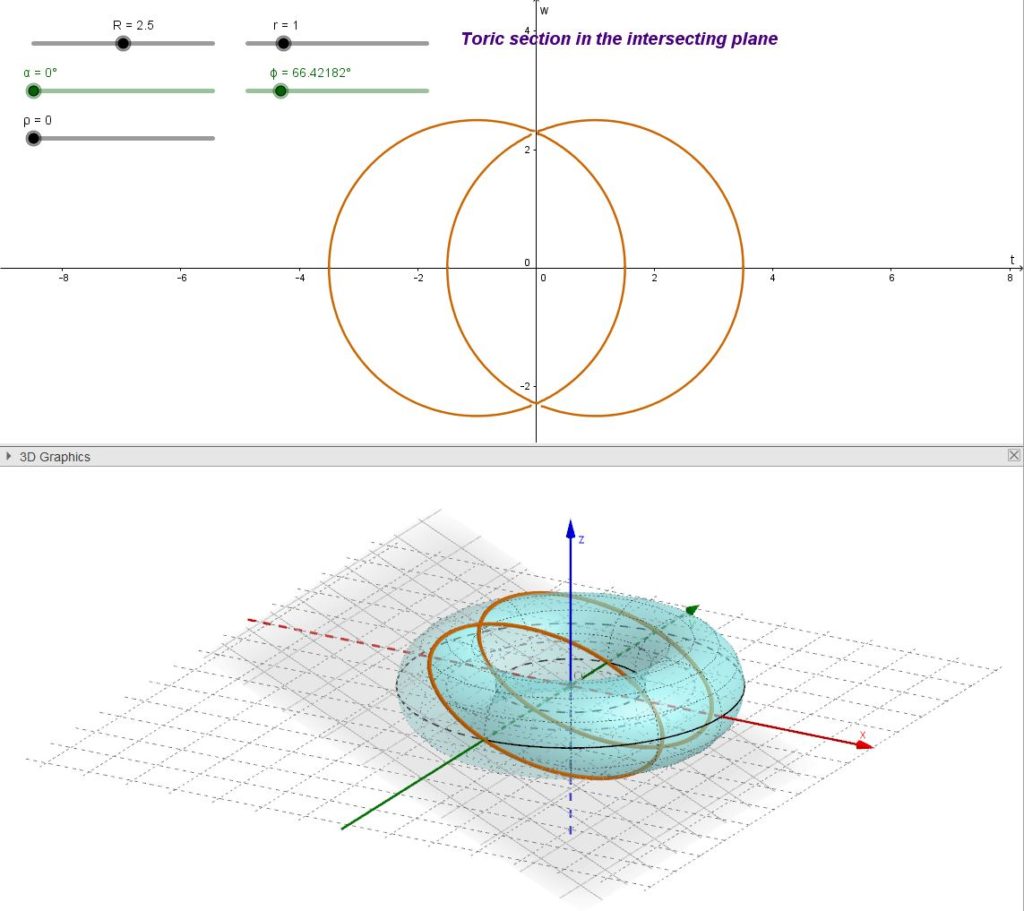 fig. 03a – The Villarceau circles

fig. 03b – Position of the intersecting plane to generate the Villarceau circles

It must be noted that, if some central conic section generates circles, not all central toric sections are circles as in the following examples.

The toric section generated by an intersecting plane that is parallel to the torus axis (or perpendicular to the torus equatorial plane) is called a spiric section. The name comes from the ancient Greek word “σπειρα” for torus.
Fall in this category Cassini’s ovals and Bernoulli’s Lemniscates.

Cassini’s ovals are spiric sections in which the distance of the cutting plane to the torus axis equals the radius r of the generating circle.
An interesting alternative definition of a Cassini’s oval is that of the set of points P such that the product of their distances to two fixed points F1 and F2 is constant:

This definition recalls that of the ellipse but here we must use the product of the distances instead of the sum.

If the focal distance is

, the Cassini’s ovals parameters, with reference to the torus intersected, have the values

. In practice the intersecting plane must be tangent to the inner equator of the torus.

The lemniscate of Bernoulli can also be defined as the set of points P such that the product of their distances to two fixed points F1 and F2 is constant and is also equal to the semi focal distance squared: 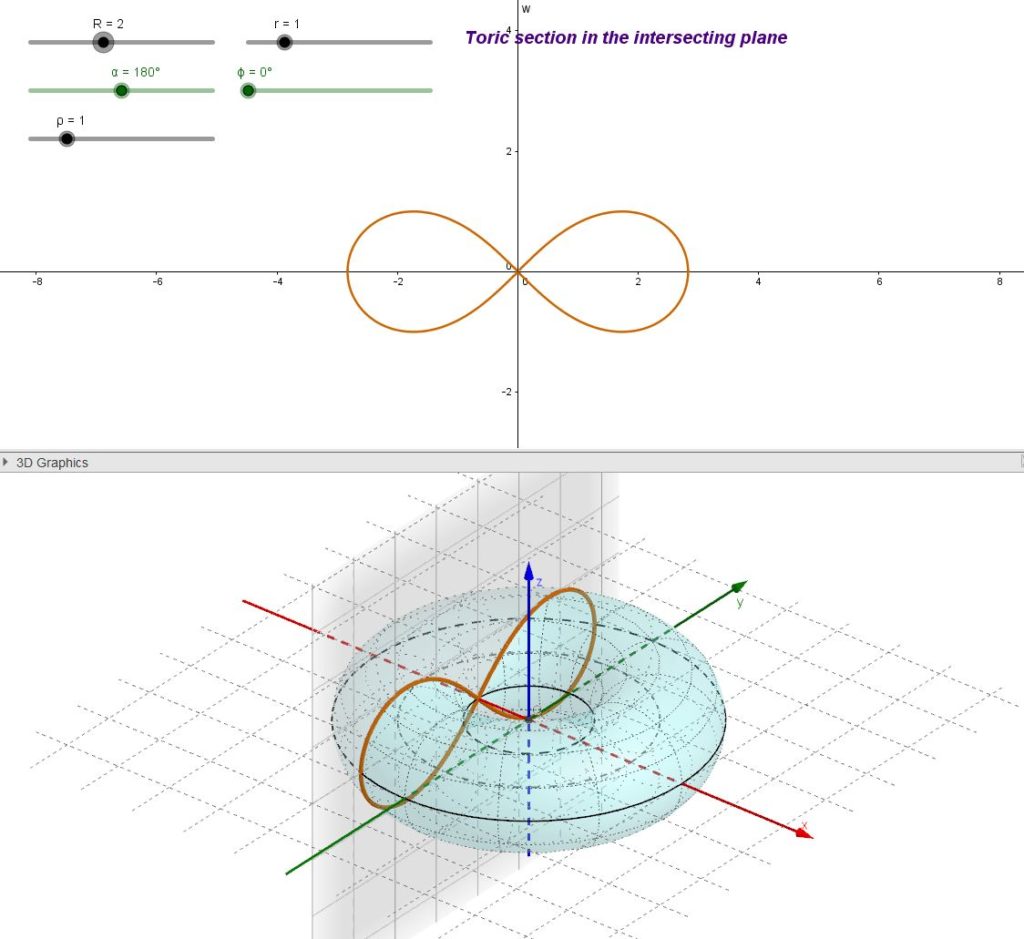 As a curiosity we can note that this lemniscate curve, representing an “eight” lying down, has been used as the symbol for mathematical “infinity” (∞) starting from the 17th century.

If we drop the requirement

) we have the family of curves called Hippopedes of Proclus. 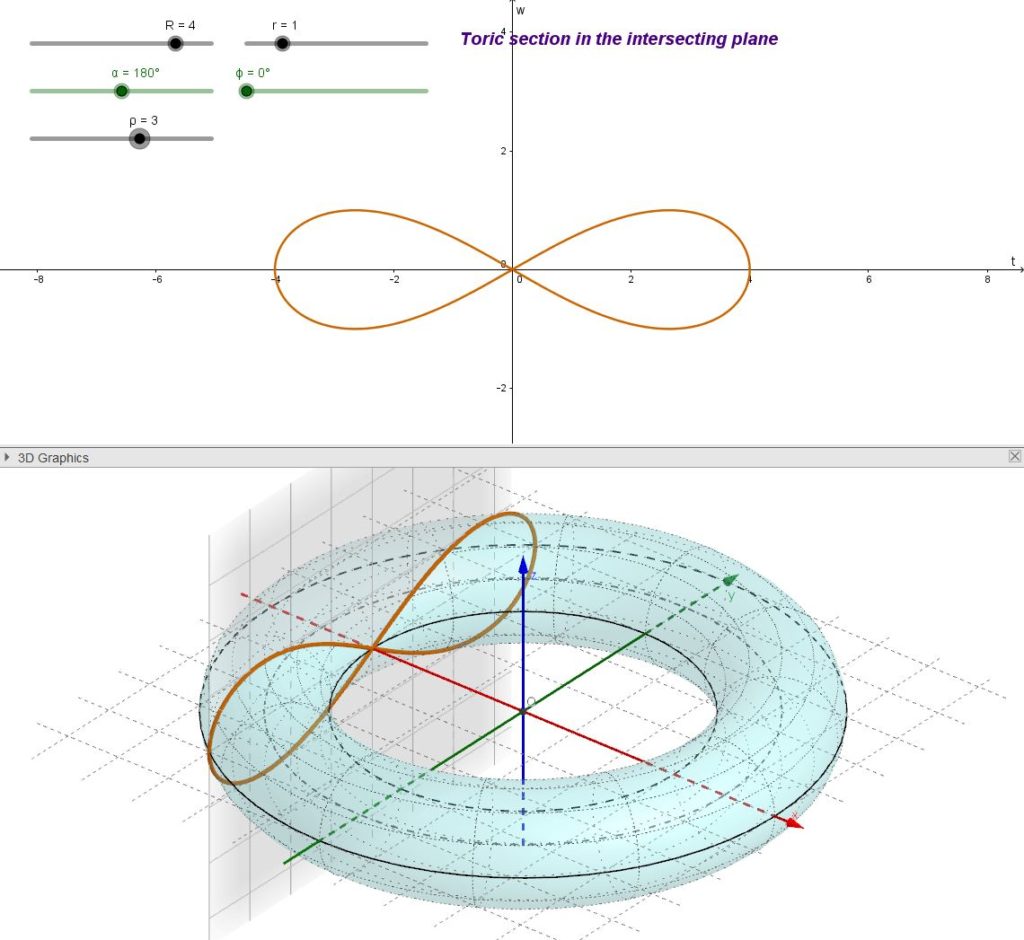 There are many other toric sections that are neither central sections nor spiric sections. This means that the cutting plane is generically slanted with respect to the torus equatorial plane and that it has a non-zero distance from the center of the torus. Here are some examples: 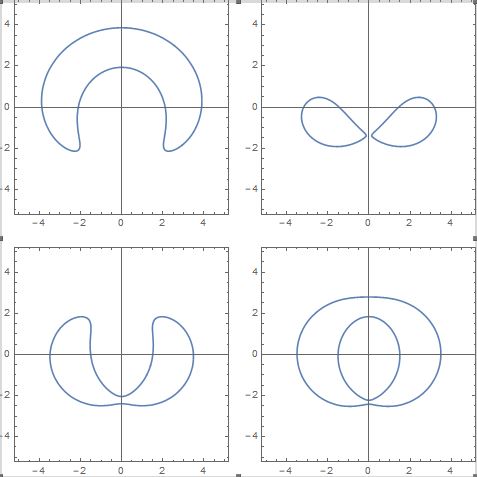 The torus surface is generated by rotating a generating circle around an axis coplanar with the circle itself. In other words it is produced by moving around a first circle of center O the center O’ of a second circle, providing that the second circle plane stays perpendicular to the tangent line to the first circle in O’.

The conical surface equation and the torus equation

, whose axis is the

coordinate axis, and whose apex is the origin O, is described by the parametric equations

where, if P is a point on the surface, the parameter s is the coordinate of P along the oriented line OP and the parameter

is the angle of rotation of P around the z axis.

The following figure explains the meaning of the parametric equations. 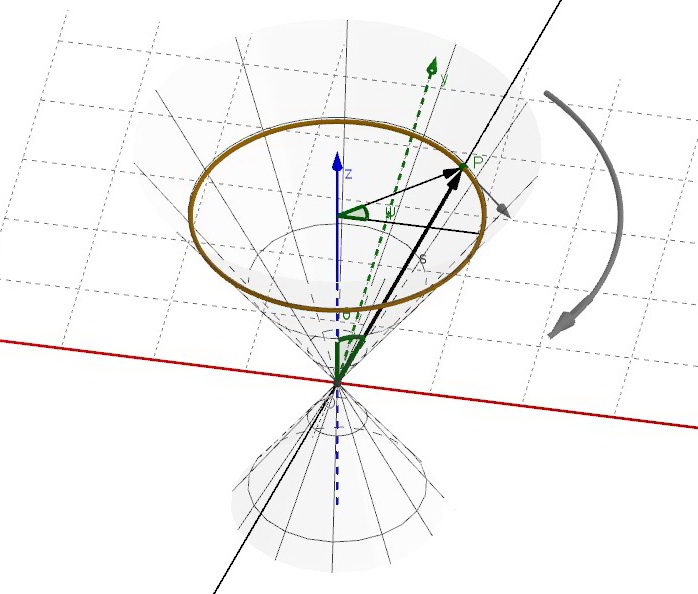 In Cartesian coordinates the conical surface has implicit equation

A torus centered in the origin with the

axis as axis of revolution and with R and r as the major and minor radii, is described by the parametric equations

The following figure explains the meaning of above parametric equations. 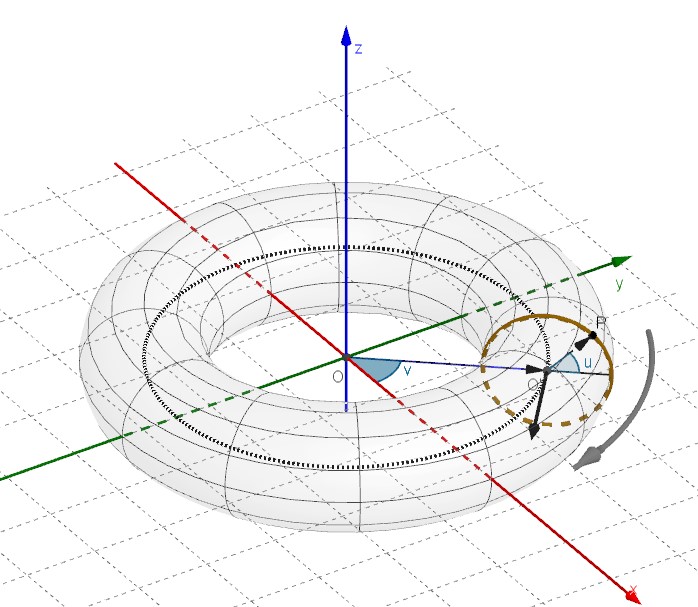 the torus Cartesian (implicit) equation is:

or (eliminating the square root to obtain a polynomial equation in x, y, z)

Both surfaces are bi-dimensional geometric objects immersed in a three dimensional space and so, like for any other surface, their parametric equations (if they can be made explicit), are always controlled by two variable parameters that set the coordinates of every point of the surface.

Both surfaces can be generated as surface of revolution, rotating a simpler figure around an axis.

The torus has a finite extension and is characterized by two parameters determining its shape (the major radius R and the minor radius r) and size, but, actually its “scale free” shape is governed by the R/r ratio).

Topologically a torus is the product space (or Cartesian product) of two circles, that can be expressed as

The topological definition of a conical surface is a little more complicated.
The cone CX of a topological space X is the quotient space:

of the product of X with the unit interval I = [0, 1].
Intuitively we make X into a cylinder and collapse (identify or glue) one end of the cylinder to a point.

Analogies and differences in the equations

In the parametric equations of both surfaces there are trigonometric functions (to represent the rotations), but in the conical surface equation one of the parameters (s) acts linearly.

Building the equation of a toric section

Before attacking the problem to find the equation of the curve of intersection between a torus and a plane it’s necessary to examine how a plane can be described by an equation and which form (Cartesian or parametric) is more convenient for the purpose.

The plane can be identified by the vector orthogonal to it. So let’s use the parameters

that set the position of the normal vector

is the direction in the horizontal

is the modulus (length) of the vector.

The components of the vector are then

. These are also the coordinates of the point

, projection of the origin

The Cartesian equation of the plane is then:

and its alternative parametric equations are: 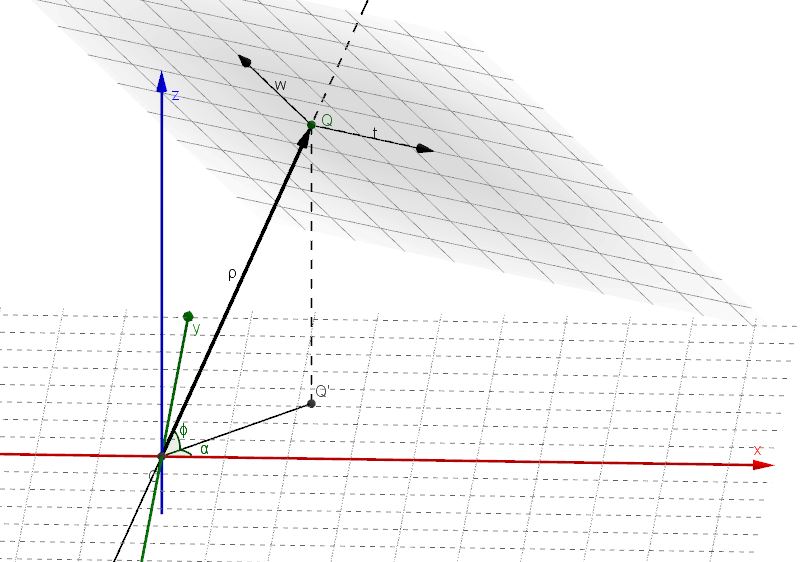 With above parametric equations the parameters

is the horizontal axis (parallel to the

is the vertical axis in this plane (perpendicular to

The intersection curve between the plane and the torus

Expanding the squares, the expression inside the square root simplifies to

so our equation will be

Expanding the squares we finally get

that is, renaming the (t, w) orthogonal coordinates in the plane with the usual letters (x, y) the equation will be

or, in polynomial form,

that can be written as

Above equation is in the form

The equation of the toric section in space

Having found an implicit equation giving the toric section represented in the intersecting plane, the last problem is to translate this equation in space and get an equation presenting the same curve in tridimensional space.

Geogebra can draw even complicated curves in the 3D graphics view if they are expressed in a parametric form, with a single parameter, of the type:

Anyway, the implicit equation previously found contains two parameters, t and w. Furthermore we know that the curve lies on the intersecting plane.
What can be done is find the relation between t and w given by the implicit equation, expressing one parameter as a function of the other, and use the plane equation with the second parameter.

The examination of the implicit equation

suggests to express t as a function of w

With some algebra we get to

Not much meaningful and simple, I admit…

Our curve in space will then be

A surprise! (the conical bridge)

The implicit equation of the toric section in the intersecting plane

can be written as follows by renaming the variables (t, w) with the usual symbols (x, y)

If we try to simplify it a little with some change of variables and get rid of the square root, we could have the idea to make the transformation

that is, we set

So we apply the geometric transformation that maps

With this mapping the toric section equation becomes

that is (in the

We have obtained the equation of an ellipse. But we can do even better and make it a circle by setting

This is the equation of a pair of circles in the yz plane.
The centers are

and the common radius is

and apply the transformation

we get a toric section!

Now what is the geometric meaning of

The y variable is unchanged, but the z variable is related to the variables (x, y) by the equation

Above is, in tridimensional space, the Cartesian equation of a conical surface with vertex

.
This is not a circular conical surface and the sections of this surface with the horizontal planes

are ellipses with semi axes of length

So, to summarize the previous passages, here’s a curious unexpected way to trace a toric section. 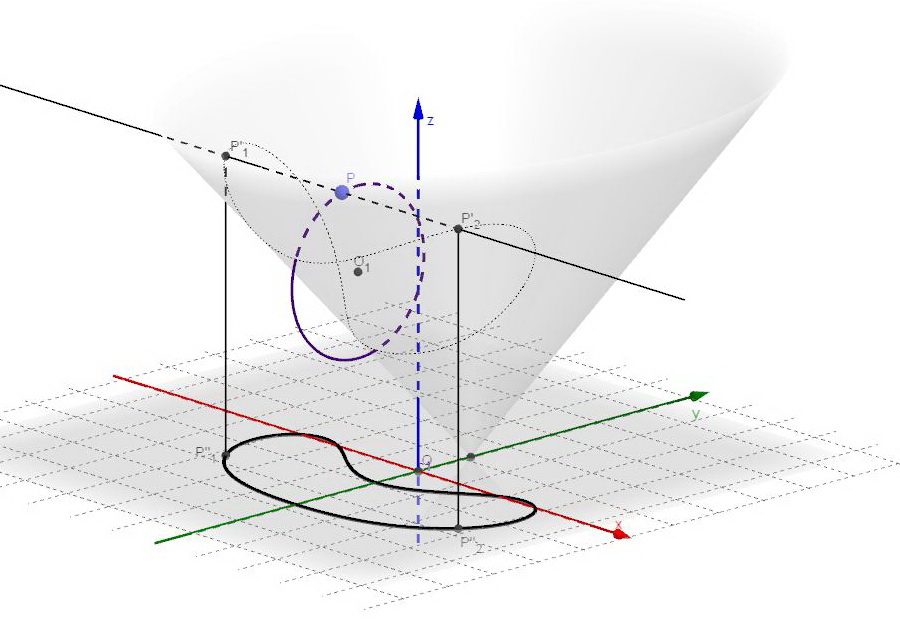 fig. 12 – Construction of a toric section with a conical surface

Actually we have done nothing but intersecting the conical surface with a cylinder and have verified that the projection of the curve of intersection on the xy plane is a toric section,

With this method we trace the toric section on the intersecting plane that, in this case, is the xy plane.
So the torus intersected must have to be tilted by the angle 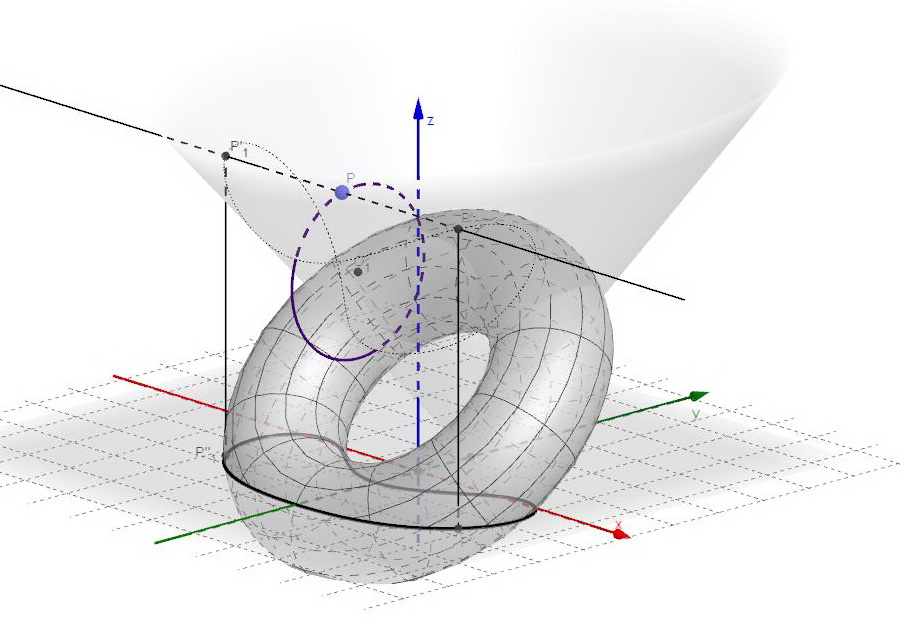 fig. 13 – Check of the construction

In conclusion, we have started with a comparison of toric and conic sections, derived the toric section equation (fourth grade), and, with some algebraic manipulation, found that the same toric section equation can also be seen has the projection on a plane of a cone-cylinder intersection (where both surfaces have second grade equations). The conical surface, then, is more closely related to the torus than expected as it enters, as a sort of bridge (fig.14), in the approximate abstract equivalence relation 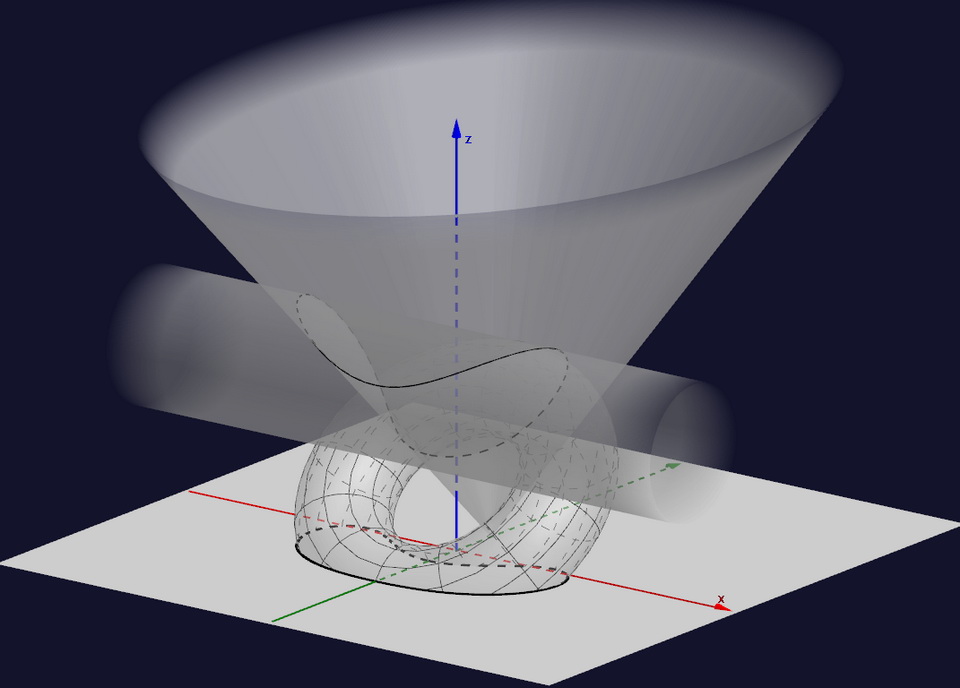 fig. 14 – The toric section generated by the curve of intersection between a cone and a cylinder

The toric section in Geogebra

In the page https://www.lucamoroni.it/simulations/intersection-torus-plane-simulation/ there is an interactive simulation about generating toric sections together with some explanation of the interactive commands.

The Geogebra file can also be seen in Geogebra’s material repository (https://ggbm.at/MmTVuXYk) or, better, downloaded as a “.ggb” file (https://www.geogebra.org/material/download/format/file/id/Vp95FtPQ or Intersection Torus-plane) and run locally on the PC. The free Geogebra Classic desktop program is available at this page.

6 thoughts on “The toric section: intersection of a torus with a plane”