Every time I try to get some deeper insight about Newton’s gravitational law I stumble upon the geometrical properties of the ellipse.
After many years of these strange and challenging encounters I really think that the ellipse is a rich and wonderful trove of geometrical nuances and subtleties.

The geometric definition of an ellipse can be given with two alternative but equivalent statements:

A) An ellipse is a plane curve whose points (

) are such that the sum of the distances from

to two fixed points (the foci,

) is constant. That is

is the semi-major axis of the ellipse)

B) An ellipse is a plane curve whose points (

) are such that the ratio of the distance of

from a fixed point (focus)

and from a fixed line (directrix)

is constant. That is, calling

The equivalence of the two definitions can be elegantly proved in space geometry (3D) with the Dandelin spheres, and using the fact that the ellipse is a conic section.
Another possible road is to use the analytic geometry in a Cartesian frame of reference.

Anyway I have been for a long time looking for a geometric proof of the equivalence of the two definitions using pure plane geometry (in 2D) using the classic procedures of Euclidean geometry.

Since I couldn’t find any proof of this kind in the web, some years ago (in 2008) I tried to devise one by myself.

By pure chance I’ve rediscovered in these days (October 2016) that old demonstration of several years ago and I’ve found it quite interesting and potentially rich of clues for other possible geometric investigations, although in need of some refinement.

So, here is a possible (and tentative) pure geometric demonstration using plain plane geometry showing the equivalence of the two definitions of the ellipse.
It is essentially unchanged with respect to the old version, but I have added a few more details to smooth out some passages.

I’m fully aware this demonstration is much more complex than the one with the Dandelin spheres, and that it could be improved and maybe made simpler, but it temporarily meets my needs for a proof living in plane (2D) geometry (until I find something better than this). 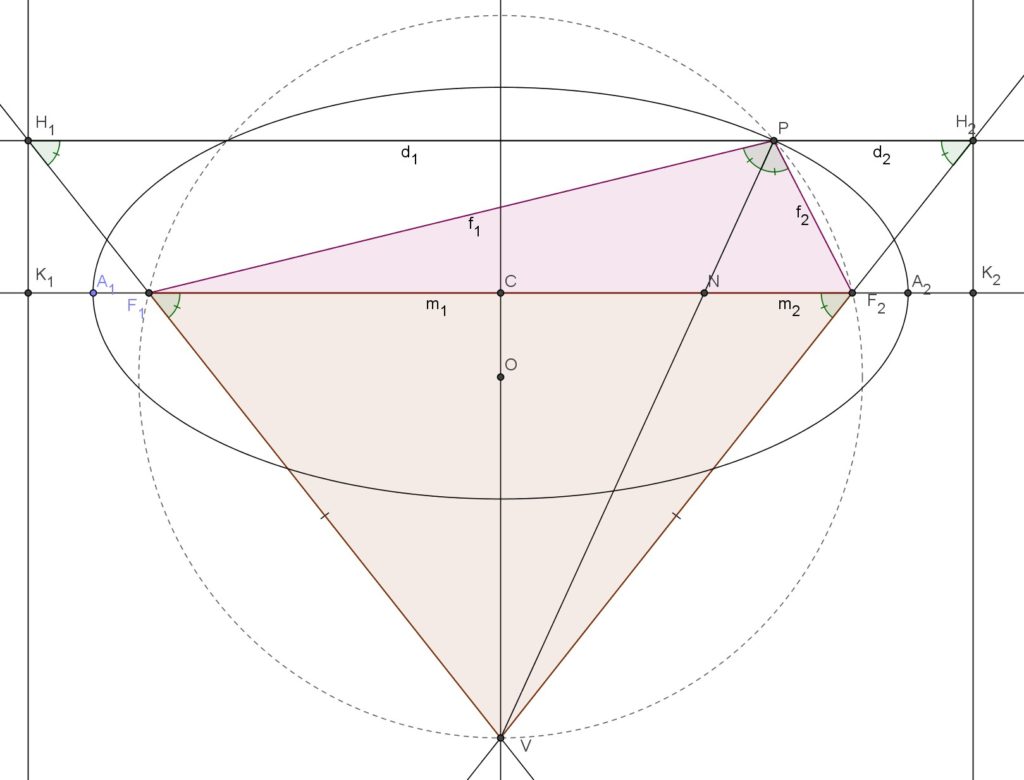 fig.1: equivalence of the “two foci” and “focus-directrix” definitions

then for any point

belonging to the locus it is

is the distance from

and an appropriate fixed line (directrix) perpendicular to the line joining

, and construct the circumscribed circle around it.

The perpendicular bisector of the segment

meets the circle (on the arc

is then a cyclic quadrilateral.

the intersection of the line

with the line joining

as the points where the line through

, it follows, for the chord properties, that the segment

Applying the angle bisector theorem to the triangle

are similar (they have the same angle

and two alternate interior angles). So, also the triangles

To complete the demonstration we must show that the points

lie on two parallel lines that have a certain constant distance, independently of the choice of the point

of the ellipse.
These two lines are the two alternative choices for the directrix, at the right or left side of the segment joining the two foci.

First, it can be observed that the line segment

is, by construction, parallel to the focal axis

and that the two points

are symmetric with respect to the perpendicular bisector of the segment

is constant.
In fact the proportion

can be rewritten as

doesn’t depend on the choice of the point

This completes the demonstration that

) is the distance from

to an appropriate fixed line (directrix) perpendicular to the line joining

as for the initial statement1.

and from the fact that the distances

are constant. Only a straight vertical line satisfies both these conditions.

(focus) and a fixed line (directrix) has a constant value

II.1) There exists a second focus

and a second directrix

for which the same relation  between the distances from

belonging to the locus the sum of the distances of

has a constant value.

Basically, starting from the focus

belonging to the locus, and calling

on the directrix it’s possible to build the triangle

, and the similar triangle

and with the angle

congruent to the angle

meets at a point

, is such that the line

that defines the position of the second directrix

(that is the line through 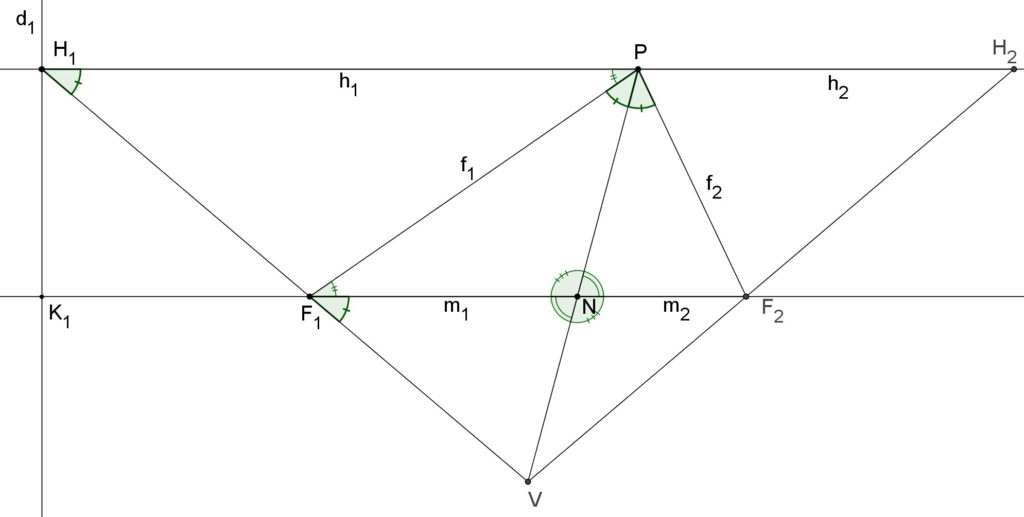 With this construction we can show that the triangle

In fact, the triangles

are similar (by construction).
The triangles

are similar, since they have two congruent angles:

are similar, for the SAS similarity criterion, since they have a congruent angle,

(opposite angles) and the two sides adjacent to that angle have lengths in the same ratio. In fact, as shown above, it is

and this proves the fact that the triangle

belongs to the perpendicular bisector of the segment

.
Furthermore it can be easily proved that

and that imply that the quadrilateral

is a cyclic quadrilateral and that the point

belongs to the circumscribed circle of the triangle

.
With the construction of the point

we can see that also the triangles

are similar (for they have the congruent alternate interior angles

and the congruent angles

Here is an updated figure representing the geometric properties found so far, highlighting the similarity of the triangles

, the similarity of the triangles

and the congruent angles. 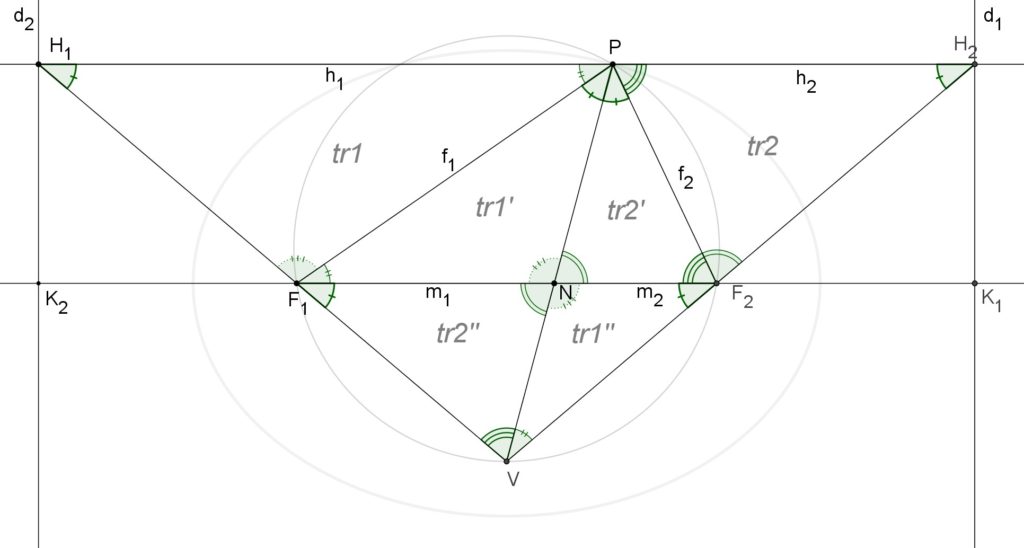 For the angle bisector theorem applied to the triangle

, with the angle in

bisected in the two congruent angles

For the similitude of the triangles

For the similitude of the triangles

so that the sum of the distances of

has a constant value.
Q.E.D.

III) A geometric construction of the ellipse using definition B)

of the ellipse.
It is based on the classic textbook
W. H. Besant – Conic Sections Treated Geometrically – 1895 – chapter 3 (see the References at the bottom for a link to the free ebook).
I’ve only changed the naming of the points and lines and have given some more detail to some of the passages.

With this construction, starting from a given directrix

and a given focus

of the ellipse must satisfy the condition 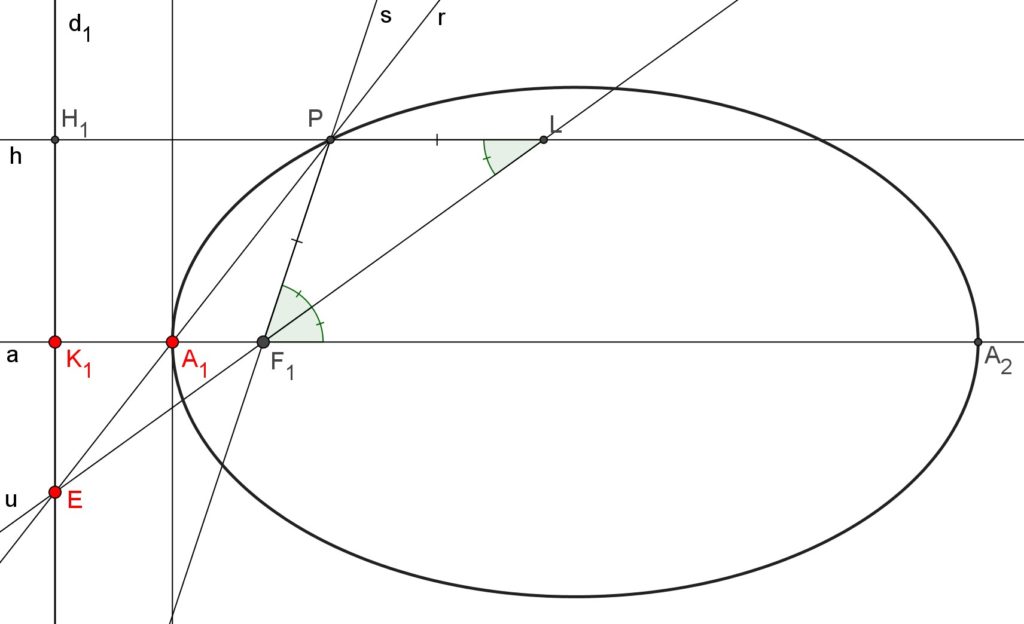 fig. 4: geometric construction of the ellipse by W.H. Besant

in the given ratio (

is another point of the ellipse and another of its vertices.

anywhere on the directrix

such that it forms with the line

the same angle as the one that

forms with the horizontal line

to form the line

the intersection point between the lines

parallel to the horizontal line

its intersection with the directrix

its intersection with the line

.
Since by construction it is

(alternate interior angles) it follows that

is isoceles.
Then it is

, cut by the lines

drawn from the common point

, for Thales’ intercept theorem it is

and putting in the congruence between

Then the the point

belongs to the locus of points (ellipse) for which it is

.
Changing the choice of the point

will result in a different point

but this will nonetheless belong to the same ellipse.